With the growing use of data-intensive services and the central role of data in running businesses and government, also the dark side of data is becoming increasingly evident. Issues with secure data collection and storage, privacy-preserving data usage and unintended consequences of algorithms running wild have been surfacing regularly.

Leaks of personal data have become disturbingly common, as most companies now hold large records of customer data with varying level of security. (Check here whether your details are included in the recent breaches!). Facebook’s hyper-personalised ads can be seen as a clear violation of privacy by many users.

Data is also playing a big role in governance and politics. Algorithms created with good intentions have shown to cause a lot of harm, for example a criminal prediction algorithms turned out to be racially biased. Data may even have been one of the decisive factors behind Trump’s win. And with new AI applications, such as self-driving cars, looming in the near future, more ethical issues will surface.

The call for data ethics!

A common theme in discussions around these problems is the need for ethical solutions and practices for the application of data and algorithms by companies and governments. Here I have gathered various good data ethics examples and initiatives. 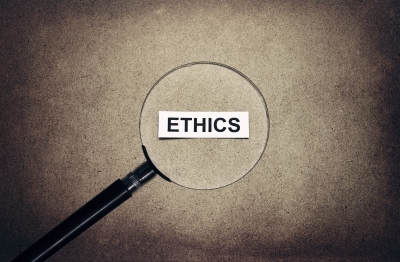 Image courtesy of winnond at FreeDigitalPhotos.net.

Kaiser Fung called for more discussion about data ethics in his Harvard Business Review article. He brings out very important questions about the ethical standards in everyday engineering work related to data:

This story keeps coming back, because the industry treats it as a technological problem requiring a technological solution. Business managers are missing the real issue: the people who collect, store, manage and process our data are not being held to any ethical standards. The emerging data science discipline is expanding so fast that few workers are thinking about the ethical implications of their everyday actions.

DataEthics.eu is a Danish think thank promoting data ethical products and services, focusing on individual data control, transparency and privacy-by-design. They present positive examples of data ethical companies and organisations in their blog, and in addition, they have recently published a book called Data Ethics – The New Competitive Advantage, summarising over 50 company such cases. I recommend you to read the abstract of the book in Techcrunch, and to watch Pernille Tranberg’s presentation from the MyData2016 conference:

A common worry in the field of AI is the consolidation of the technology on the hands of the few big players, where only a few people have control over how AI technologies are developed and used. This would also make the necessary discussion on AI ethics harder.

This has been noted inside the field as well, and several initiatives have emerged that aim to tackle problems related to the consolidation and AI ethics, including
OpenAI, Partnership on AI, and the Fairness, Accountability, and Transparency in Machine Learning (FATML).

Despite the promising goals issued by these initiatives, it remains to be seen whether this is mere white-washing, or will we see some concrete progress towards more ethical and sustainable use of AI technologies.

Also academics have woken up to the need of research and discussion on data ethics. A good example is the Council for Big Data, Ethics, and Society, developing “frameworks to help researchers, practitioners, and the public understand the social, ethical, legal, and policy issues that underpin the big data phenomenon”.

Also worth checking is the special issue on The ethical impact of data science, along with a review of the issue by Dataethics.eu. Relevant literature can also be found from the FatML participants.

In addition, as data-intensive research becomes more common, the education for ethical research practices need to be refreshed, as discussed in this great article by Data & Society.

Do not forget government activity!

White house issued a report on Big Data, which “charts pathways for fairness and opportunity but also cautions against re-encoding bias and discrimination into algorithmic systems”. Data ethics issues are taken seriously on the US, as becomes evident from the talks and actions of DJ Patil, Chief Data Scientist of the country. I highly recommend listening to this recent Partically Derivative podcast interviewing him!

Also the UK is active, where the a Council for Data Ethics was recently set up. A person to follow here is Hetan Shan, the CEO Royal Statistical Society, who has spoken up on many data ethics issues.

After following the conversation on data ethics for some time, I was awestruck to read the opinion piece on algorithmic accountability by Liisa Jaakonsaari, a Finnish Member of the European Parliament. Showing surprising knowledgeability, she justifies the importance of building “a framework on algorithmic accountability and transparency in Europe to uphold free speech, the free flow of information, fair competition, as well as, privacy, trust and democracy in digital societies”.

The need for more attention on data ethics is clear, and it’s great to the see discussion being started in many fronts from the academia to companies and governments, and also concrete inititiatives taken to promote more sustantainable use of data and algorithms.